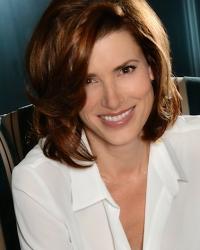 Sam Sorbo credits her adventurous personality and an inquisitive nature for her eclectic list of accomplishments and attributes: international fashion model, real estate developer, actress, wife, mother of three, writer, philosopher, photographer, hospital volunteer, and founder of TrueFeminist.com. She speaks five languages fluently and advocates home schooling.
A native of Pittsburgh, PA, Sam first traveled abroad with her mother on a whirlwind tour of Europe that kindled her intense travel lust. She spent her senior year of high school as an exchange student in Sweden, then attended Duke University to study biomedical engineering. During college she spent a year in Paris, learning French and pursuing her interest in fashion and photography with the renowned Elite modeling agency in Paris, France. While enjoying great success as an international model, traveling from Russia to Japan and Cuba to South Africa, she eventually installed herself in New York at the Ford Agency and began exploring acting opportunities, picking up German and Italian along the way. She also began developing real estate at this time.
Getting cast in films like Twenty Bucks opposite Brendan Fraser and The Bonfire of the Vanities, with Bruce Willis, Melanie Griffiths, Morgan Freeman, and F. Murray Abraham, led her to move to Hollywood, where she continued with starring roles in films such as The Crew, opposite Viggo Mortenson, Fortunes of War, Martin Sheen, and Ed and His Dead Mother, Steve Buscemi and numerous guest-starring turns on TV, including a half-season on Chicago Hope with Christine Lahti and Hercules: The Legendary Journeys, during which she met and subsequently married the shows star, Kevin Sorbo.
An author in her own right, Gizmoe: The legendary Journeys and The Answer, Sam was a contributor to Kevins recent memoir, True Strength: My Journey from Hercules to Mere Mortal and How Nearly Dying Saved My Life DaCapo Press, ISBN 978-0-306-82036-6, which chronicles Kevins intense battle to recover from the three strokes he suffered shortly before the pair were married.
The Sorbos currently live in Los Angeles where Sam enjoys writing and educating their three children.