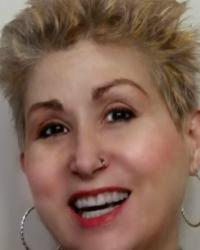 Samaria considers herself a warrior woman who has lived through years of adversity to find her gift in healing others. She is of metis ancestry, cree and blackfoot origin.  She was raised in a spiritual home.  In her backyard was a sweat lodge and every Sunday people came to participate in the ceremony.  As she grew older she became fascinated with other spiritual traditions, and Wicca and its strong feminine aspects became very important to her.  Later she became interested in yoga.  There she was introduced to the eastern philosophies, chakras, and her eyes opened to a new way of looking at the world. She now sees the world through different eyes and considers herself a fusion of spirituality.  "When it all comes down to it, all religions and spirituality ultimately focus on love.  Love is the answer to all, to everything.  That is the basis of all."  That is the philosophy of how she lives her life. When she was young she was a very successful professional belly dancer and traveled all over Canada, united states, and the middle east.  After years of settling down, she never lost the dancer in her.  When she stumbled across the chakradance facilitator's course it was a dream come true.  Teaching dance and spirituality.  A combination of the two most important things in her life.  As she studied to become a chakradance facilitator she realized she found her calling. Her love of chakradance and its healing properties is something she cherishes and longs to share with others.