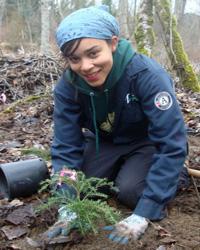 Sarra Tekola is an environmental and social justice student-activist, and environmental science undergraduate researcher at the University of Washington.

She has done research on ocean acidifcation's effect on pteropods, hypoxia's effect on Hake fish in the Hood Canal, the trophic cascade caused by the return of wolves in Yellowstone, climate change communication in rural towns and carbon cycling in the sediments distrubuted by the Elwha dam removal. She is a Merck fellow, Mary Gates Scholar, a McNair scholar has published her research.

The activism she has been involved with spans all different fields from climate change to racial inequalities, with the common thread of justice. She is one of the co-leaders of Divest UW, a group working to get the University of Washington to remove its endowment from the fossil fuel industry stocks, so far they have succeeded in moving 25 million into renewable energy stocks.