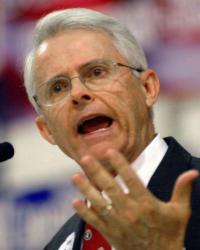 Senator Richard Black is currently a member of the Virginia State Senate and is the most vocal politician in the country against the Syrian conflict. His experiences in the military provide him a unique perspective to intelligently speak on the realities of the region.

Black was a career military officer. He served in both the U.S. Marines and in the U.S. Army JAG Corps. He served a total of 31 years active and reserve, rising from the rank of private to full colonel. Later he served as the Chief of the Army's Criminal Law Division at the Pentagon focusing on Africa and the Middle East.

In April 2014, Black sent a letter to Assad thanking "the Syrian Arab Army for its heroic rescue of Christians in the Qalamoun Mountain Range", praising Assad for "treating with respect all Christians and the small community of Jews in Damascus," and stating it was obvious that the rebel side of the war was largely being fought by "vicious war criminals linked to Al Qaeda"

On April 27, 2016, Black began a three-day trip to Syria in support of its government. Explaining his trip in a series of Twitter exchanges with the Washington Post, Black wrote that the U.S. was "allied with two of the most vile nations on earth, Saudi Arabia and Turkey, which are intent on imposing a [Wahhabi] fundamentalist government on the Syrian people."

The Islamic State has included Black in a list of its enemies, calling him "The American Crusador".

Senator Black has been vocal on the ramifications if Syria falls; "Over 4 million Christians, Jews, moderate rebels, and others will be slaughtered... It will be on of the worst blood baths in human history".