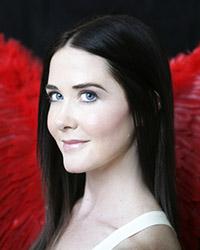 Sera Beak is a Harvard-trained scholar of comparative world religions who's spent the past 14 years traveling the world studying spirituality from whirling with Sufi dervishes to meeting the Dalai Lama on her 21st birthday; from taking the host from a Croatian Catholic mystic who had the stigmata truly to having life-altering visions with shamans and everything in between. She now happily deems herself a spiritual cowgirl and a redvolutionary although The New York Times recently called her one of the new "Carrie Bradshaws of self-help spirituality." In July, 2013 her new book was published - Red Hot and Holy: A Heretic's Love Story.


Sera is the author of The Red Book: A Deliciously Unorthodox Approach to Igniting Your Divine Spark and the forthcoming book, Redvolution: Dare to Disturb the Universe, and director of the upcoming feature film also entitled Redvolution. Besides these creative projects, she offers Red workshops, talks, mentorship, divine winks, a Redvolution pleasure kit, and she officiates weddings in a red dress.