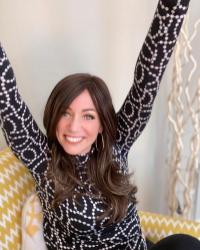 Known as “America’s Joy Magnet”, Shari Alyse is a TEDx and Inspirational Keynote Speaker, TV Personality and Best Selling Author. Shari’s deep commitment to others is motivated by her own journey through childhood sexual abuse and other childhood traumas. At seven-years-old, Shari found herself having to use her voice on a witness stand to testify against the man who had abused her. She now uses her voice to speak around the world on self-worth, mindset, overcoming obstacles, and how to live a joy-filled life. In 2013, Shari co-founded one of the first online holistic wellness directories and communities. She is featured regularly as a guest expert on different media outlets including ABC, FOX, NBC, CBS radio, Huffington Post, Thrive Global, to name a few. She has gone on to Executive produce and host multiple online TV and radio shows, most recently, the talk show – Heart to Heart. Over the last 15 years, Shari has reached millions of people with her inspirational videos, speaking engagements, coaching and writings. Shari’s book, Love Yourself Happy, quickly became a #1 New Release and International Best Seller. Shari believes that in the radical acceptance of ourselves, we truly can live a life we love.