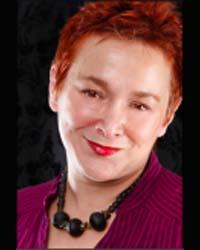 Sharyn Wolf, CSW, is a Manhattan-based psychotherapist and relationships expert whose down-to-earth, practical methods have helped couples build relationships that are a lot more satisfying and a lot more fun. For the past twenty years, she has led relationship and dating workshops from Boston to Seattle, and in 2005, she served as a national spokesperson and consultant for Viagra, bringing her expertise to and gaining additional insight from the relationships and sex lives of long-married couples.

Through the years she has also worked as a spokesperson and consultant with corporations such as Proctor & Gamble, Durex, Hewlett Packard, and others bringing her knowledge to many different audiences. A regular media presence and commentator on celebrity marriages and modern romance, Sharyn has been a frequent guest on more than three-hundred television and radio shows, including Oprah, 48 Hours, and CNN. Her work has been profiled internationally in publications such as The Wall Street Journal, Newsweek, The Boston Globe, The Washington Post, The Seattle Times, and The New York Times.