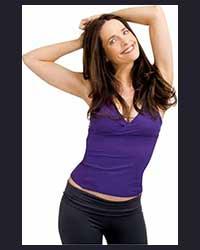 Sheila Kelleyis one of the most renowned and sought after global femme leaders today. She is a successful actress, author, speaker, philanthropist and most notably, the originator of the pole dance fitness and striptease phenomenon. Sheila is the premiere "4th Wave Feminist" of the modern era. Sheila Kelley's S Factor was launched in Los Angeles, CA in 2001 after Sheila discovered the physical and emotional benefits of pole dancing while researching a film role. Her classes offered uninhibited feminine movement without the taboo of shame or judgment. It's popularity reached new heights as Sheila and her celebrity clients boasted the benefits of the S Factor methods on national broadcasts. Sheila Kelley's S Factor now spans the globe, reaching women through studios, elite retreats, books, DVDs and workshops. Sheila is widely regarded as an authority on female empowerment as she tirelessly campaigns on behalf of all women unearthing their eroticism, beauty, potential and power.


Sheila studied ballet, anatomy and movement physiology at the NYU's Tisch School of Arts. Her vast educational background also includes women's studies, psychology and female neurology, all of which have influenced her curriculum and philosophy. With over 11 years of hands on experience, Sheila has worked with tens of thousands of women walking their feminine path. Sheila continues to write, teach, speak and perform as one of the foremost experts on female movement and empowerment. The world's leading authorities in personal development including Tony Robbins often reference the depth and poignancy of Sheila's findings. Sheila has appeared multiple times on numerous television shows including Oprah, The Ellen Degeneres Show, Late Night with Conan O'Brien, The Martha Stewart Show, The Tonight Show with Jay Leno, 20/20, 48 Hours, and The View.