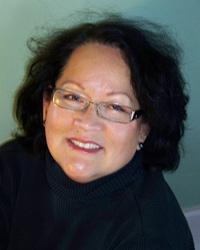 Shirley Enebrad is an independent television producer/writer and is the author of Over the Rainbow Bridge.

During her career as an award-winning television producer and writer she worked at WRAL-TV in Raleigh and primarily at KOMO-TV but has freelanced for KING, KIRO and KCTS in Seattle, Washington. A dedicated volunteer Enebrad is president of the local Candlelighters Childhood Cancer Foundation chapter that helps families deal with pediatric cancer. She is also a Certified Grief Specialist and conducts workshops and one-on-one counseling. Former Washington State Team Leader for CureSearch National Childhood Cancer Foundation, Enebrad is proud of the accomplishment of the unanimous passage in the House and the Senate of the Caroline Pryce Walker Conquer Childhood Cancer Bill in 2008.

Enebrad has pledged 30% of the net proceeds of her book to be split evenly between CureSearch National Childhood Foundation and Candlelighters Childhood Cancer Foundation of Western Washington.