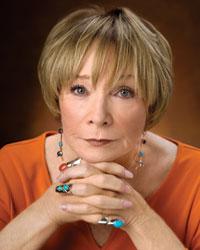 Ive been a questioner all my life . . . This is how Shirley MacLaine describes herself. The bestselling author and award-winning actress Shirley MacLaine, invites readers to join her on the powerful, provocative journeys of her life. She is comfortable being Out on a Limb with her questions and has circled the globe on her search. She has walked The Camino de Santiago in meditative solitude, took the first all female documentary crew into China, and lived with the Masai in Africa.

Over the years, Shirley has firmly established herself as a fearless, iconoclastic thinker and seeker of truth as she discovers a greater understanding of her own place in the universe. With her trademark wit and candor Shirleys writings explore what has always interested her most - those things that are unseen. What is consciousness? What is the purpose of our lives? How can we maintain a solid connection with the Divine? Are we alone in the universe? And perhaps the greatest mystery of all, what happens to us after death?

Shirleys exploration of human spirituality and the soul has guided her on many paths around the world. When she made the journey of the Santiago de Compostela Camino in Spain, like so many other pilgrims had made in the past, she found it both an intense spiritual and physical challenge. She completed the grueling trek in 30 days but more astounding, was the route she took spiritually. Through a range of astonishing and liberating visions, Shirley saw into the meaning of the cosmos, secrets to ancient civilizations and a more profound recognition of the timelessness of the soul.

Shirley MacLaine, nominated for six Academy Awards, won the Oscar for Best Actress in 1984 for Terms of Endearment. She has appeared in more than fifty films and has won three Emmy Awards and ten Golden Globe Awards. Shirley has been honored with the Golden Bear Award for lifetime achievement at the Berlin International Film Festival and the Cecil B. DeMille Award for outstanding contribution to the entertainment field. She has also won two British Academy awards, two German Silver Bear and Golden Camera awards, two Volpi Cup awards at the Venice Film Festival, two Donatello awards in Italy, and New York Film Critics and Los Angeles Film Critics awards. The author of ten international bestsellers, she lives in Malibu, California, and Santa Fe, New Mexico.