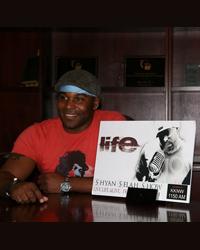 Already accomplished in his work as President/CEO of Brave
New World BNW, as an artist Shyan Selah has created a style of music that is both unique and commercial. Raised on the greatest
icons in music from The Beatles to James Brown, he's poised to take his special sound of Hip Hop, rock and soul music mainstream with a brand new band, The Republic of Sound, and new album, City of Angels which is to be released world-wide in 2011.

A versatile artist, Selah's freshman album, also aptly named Brave New World, included highlights such as the club-bangin' hip hop single "Concrete City," which was featured on the One Love: Tru
Ballin' 2 DVD along exclusive footage of major NBA and NFL sports stars, and the electric guitar laced "Hollywood Blvd," which went 1 on nationwide college radio and was featured on the CBS/Paramount drama, NUMB3RS. The full Brave New World album was licensed by television networks such as MTV and VH1.

A mix of hip hop, rock, R&B and soul, Brave New World was a new
combination of sound for a new type of artist: one who can both rap
and sing, one who's both an entrepreneur and an activist - a musician
raised in the tradition of Hollywood with a progressive edge. In both
business and music Selah is a perfectionist and it is exemplified in the quality sound of Brave New World, which was recorded at the
prestigious House of Blues Studios and touched by the most
experienced hands of Master Mix Engineer Booker T. Jones III
Boyz II Men, Mary J. Bilge, Destiny's Child and Eddy Schreyer of
Oasis Mastering Christina Aguilera, Beyonc, Will Smith, Akon.
Other music projects, such as the theme songs for the films Born to Ride and Sweetwater both in production and the song "Fly," which was licensed by E Networks, see Selah's musical talent expanding further into blues, rock, R&B and jazz - as does upcoming collaborations with talents such as World Music performer, Asha Puthli who sang with and studied under the jazz iconoclast Ornette Coleman.

Since the beginning Selah has pledged his work will go beyond his recording career. He is a huge proponent of social cause and issues, like joining with organizations such as the Susan G. Komen Foundation for the "Save the Girls" Breast Cancer Awareness event. He's also a firm believer in fostering cultural arts and music, athletics, and education, and has shown his dedication to those values by creating alliances in the inner cities and in the community with organizations such as the Boys and Girls Club and the Dr. Maxine Mimms Academy for Suspended and Expelled Youth in Tacoma, Washington. As an artist who strives to reach the youth, Selah has developed a cross-appeal that gives a refreshing point of view of the often-misunderstood art forms of hip-hop and rock and roll. He has been on the speaking circuit for years, working with various high schools and colleges around the nation, and in late 2008, he continued his work combining love of music with community outreach by partnering with Liquid Experience/Authentic Hendrix to develop community outreach and special events to benefit up and coming musicians under the banner of rock icon Jimi Hendrix.

In December 2009 Selah launched "Shyan LIVE" as a kickoff event for his non-profit, The Brave Foundation. "Shyan LIVE," designed for the youth in Federal Way, WA at the Federal Way Commons Mall, featured performances by youth dance groups, a headlining performance by Selah
and a "Stay in School" speech by his good friend and former NBA/SuperSonics legend Dean Tolson, who detailed his battle with illiteracy during his basketball career and the triumph of attaining a Master's Degree upon retiring.

The creation of The Brave Foundation, which acts as a full philanthropic arm to Brave New World, serves the purpose of inspiring health, wealth, and success to at-risk youth by using a fusion of arts, music, athletics and business to re-energize students about the importance of education.

In November of 2010 Shyan Selah launched his own talk radio show
entitled "LIFE," which features a variety of music industry artists,
pioneers and experts, entrepreneurs and activists from Selah's own
network as guests to discuss their respective careers and life
accomplishments. "LIFE: The Shyan Selah Show" www.shyanselahshow.com is about shining the light on the behind
the scenes world of the entertainment industry while giving a wellrounded look at what it takes to lead a successful life no matter what field you're in. The show is a supporter of The Brave Foundation.