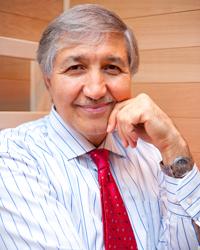 Si Barghelame is an inventor who holds 4 engineering degrees from the University of Utah. He owns U.S. Patent 7,108,712,B2. Si invented a sauna that combines the health benefits of full-spectrum light therapy and infrared heat. SunSauna started in a small garage in Redmond, WA. In the winter of 1995, Si was suffering from a mild case of the winter blues. He couldnt quite snap out of it. So he studied light therapy and the works of Dr Norman Rosenthal, the man credited with creating the term Seasonal Affective Disorder. Si tinkered with his home sauna and installed full-spectrum lights. And it worked. A few months later, Si lugged his prototype to the Seattle Home Show. A massive line formed to see this contraption. People loved it and then he knew he was on to something.