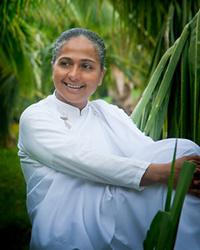 For decades, Sister Jenna, as she is affectionately known, has moved and shaped the consciousness of lives around the world. She has traveled to over 80 countries to raise awareness of the self and the Divine. Her wisdom, peace, and compassion for humanity are expressed through the variety of initiatives she spearheads for youths, women, governments, and communities. She is someone who herself has come from self-destructive patterns and turned that into courage and service to humanity.

Sister Jenna is the founder and director of the Meditation Museum, and director of the Washington, D.C. branch of the Brahma Kumaris, a worldwide organization with over 8,000 branches in 120 countries. Under her guidance, in 2012, the nationwide America Meditating initiative was launched, promoting an awareness of personal empowerment and peace as a way of increasing harmony and a more vibrant America during a time of great uncertainty.

Sister Jenna is also the host of the America Meditating Radio Program and co-host for an upcoming new reality TV show entitled "Soul Search: What are we Looking For?" Featured in the Huffington Post, Patch and various media outlets, Sister Jenna's soft spoken voice of wisdom moves lives and shifts consciousness. She has been featured in various books and publications. She is invited by major institutions, such as The World Bank Group, The Pentagon, The Coast Guard, The George Washington University to name a few, as well as, by grassroots organizations to offer lectures and workshops that promote positive awareness, change, and solutions. Her spiritual leadership in a city like Washington, D.C., has yielded meaningful relationships for personal, local, and global change.