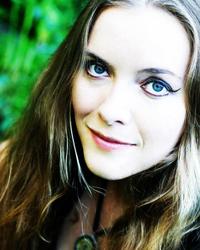 "Without our songs and stories, we are nothing." S. J. Tucker is a Pixie Pirate Powerhouse, comin' at you straight outta Neverland Named a vanguard of the Myth-punk movement, Tucker is the voice of lore at the campfire and the sharp laughter of modern myth. With one hand anchored in her art and the other held out to you, she is songs and stories, community and wit.

A fascinating hybrid of geography and experience, S. J., called "Sooj" by friends and fans, is a continent-crossing musical nomad born and raised in the sticky, mean delta humidity of southeast Arkansas. A dynamic live performer known for her willingness to follow an evocative ballad with a tune about ninjas or pirates, Tucker is never in danger of taking herself too seriously. Reviewers compare her voice to that of Dar Williams or Janis Ian, her guitar work to that of Emily Saliers, and her style to "the hybrid offspring of Bugs Bunny and Dr. Who."

With over ten albums of original material and numerous songwriting and performance awards under her belt, Sooj professionally narrated her first audiobook in 2012 and released her very first film score in the spring of 2013. She hopes to complete an album of blues-influenced material in 2014, as well as another spiritually focused album for her fans in the Pagan community. Currently in the works is a children's book version of Sooj's songs about Wendy and Peter Pan, beautifully illustrated by artist Matt Hawk. 2014 also marks a major milestone for S. J.: ten years as a full-time performer.