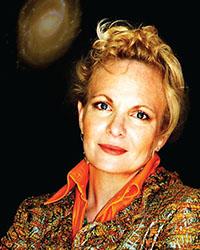 Sondra Sneed is a recovering atheist. She met God in the basement of a rental house in Secaucus, NJ. A voice from the eons wrote a message in her journal, "Unemployed? It is my assertion you are employed by me." This moment marked the first day of her year in solitude, in 2004, during which she produced 10 spiral notebooks in dialogue with the creator of the universe. She's kept these notebooks in secret for eight years - until now.

Eight years later Sondra is ready to take-up her own purpose as a messenger for God, resulting in a debut book, published by the same publisher who discovered Neale Donald Walsch, author of Conversations With God series.

She says, "Now, more than ever, each human being has a purpose and a place on the path of human righteousness Right-now-ness. But righteousness is not just for the pious, it is for those who know the mind of God is within them. Those who know they will never lose the way that life becomes, as it moves in the course of the magnificent means."

Sondra is a science and technology industry writer. All the years she's spent interviewing scientists and engineers, translating their high minded knowledge for lay persons, she has also been interviewing the highest mind, the Creator of the Universe.