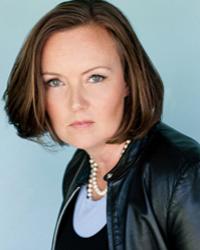 A global award-winning media executive and former head of digital for Hearst Magazines International, Sophia Stuart led a busy life. Stressed by her impressive, yet taxing career, she started writing and taking photographs on long business trips and during her infrequent downtime to decompress. Eventually her musing turned into a character, Gloria, a trainee angel who passed her time watching old Doris Day movies. Gloria's ability to see the world through rose-colored glasses inspired Sophia to do the same. She started her blog, teamgloria.com, to give herself a place to write in Gloria's voice and document glorious people, places, and things. And she was going to need teamgloria to get her through what came next.

At a doctor's visit a tumor was found in Sophia's throat. Over the course of a year, biopsies and ultrasounds would reveal two more tumors and a mass that required a five and a half hour surgery for removal. Teamgloria.com became an even more valuable refuge for Sophia and she began to recognize that the documentation of all the glorious things in life could help others in the same way they helped her.