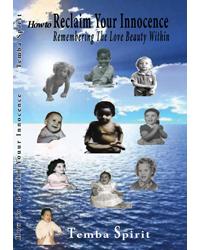 In Temba Spirit's NEW acclaimed book, How to Reclaim Your Innocence: Remembering the Love Beauty Within, Temba reveals his remarkable transformation of love and forgiveness while incarcerated at Rikers Island. Imprisoned for stealing, he began telling the most notorious prisoners that they had goodness in them and there was nothing they could do to change that. As he looked into their eyes and told them this, they would begin to cry. Upon his release he risked his life by renouncing his gang ties on a national television program and his story was discovered by New York Times bestselling author Janet Bray Attwood who invited him to tour with her.

Since that time Temba has gone on to create music, become an inspirational speaker, humanitarian and now author. He believes these paths are all related ways of consciousness expressing itself as love.

Temba's experience was so powerful, moving and inspirational that it was publicized by the M.A. Center, a world-renowned humanitarian organization whose founder Amma, an Indian Spiritual Master, is a United Nations Gandhi-King Award recipient. While still behind bars he made a commitment to write and visit the men he left behind and to continue his 'spiritual retreat with gangsters.' He began receiving so many letters he reached out to the M.A Center for help, which has led to the Circle of Love Inside program, now in every major city in the United States, as well as other parts of the world. &8232;&8232;