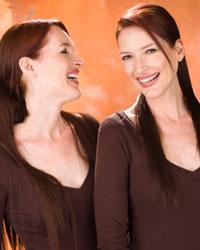 Terry and Linda Jamison, known internationally as "The Psychic Twins," are the only twin psychics in the world. And yes, they are identical The Psychic Twins are considered by many to be the most documented and accurate psychics working today.

With twenty years as professional psychics, identical twins Terry and
Linda Jamison, internationally known as "The Psychic Twins," are widely considered to be the world's most documented psychics, with an unrivaled track record of accurate world and celebrity predictions. The Psychic Twins have shocked audiences across the world with their eerily accurate predictions, including the events of 9/11, JFK Jr.'s death in a small plane, the Times Square terrorist incident, and the winners of the 2009 Oscars. The Jamison sisters cracked the case of Olivia Newton-John's missing boyfriend on the CBS Insider in 2005. They most recently predicted the record 500-year flood and the deadly tornadoes of 2011, as well as the massive earthquakes of 2010. Squidoo.com even named them in the World's Top Ten Psychic Mediums


The Psychic Twins have appeared on over sixty TV shows worldwide, on ABC, NBC, CBS, FOX, TLC, A&E, Biography Channel and Oprah Winfrey's OXYGEN Network. Also, The Psychic Twins have starred in a dozen documentary films, including Psychic Children A&E, Hollywood Ghost Stories AMC, Twin Stories Turner Superstation and Extreme Twins Channel 5 UK. Terry and Linda Jamison are profiled in The 100 Top Psychics in America Simon and Schuster and The Book of Twins Doubleday. The Psychic Twins reside in Los Angeles, where they have a private counseling practice for individuals and businesses all over the world. They are frequent guests on national TV and Radio shows.