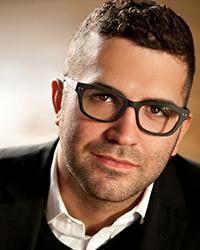 Thomas John is an internationally regarded psychic medium and clairvoyant, as well as a published author and life coach, who has conducted hundreds of readings around the world. Known for his accuracy and detailed readings, Thomas John has provided evidence of the survival of consciousness to clients ranging from doctors, lawyers, Wall Street moguls, several high-profile celebrities including Jennifer Lopez, Courteney Cox, Jenny McCarthy, Sean Young, Sonja Tremont-Morgan, Ramona Singer, Sanaa Lathan, Gabriel Soto and Eva Pepaj, as well as noteworthy individuals such as Lynne White, Donny Deutsch, Magee Hickey and Judy Licht.


Growing up south of Boston in an Italian, Catholic household, Thomas Johns gift was not immediately understood or accepted. Sensing the need to discover the world outside of his suburban neighborhood, Thomas attended the University of Chicago, where he received a Bachelor of the Arts in Human Development, with Departmental Honors. In his post graduate years, Thomas pursued several research positions in medical and hospital settings, which included internships at Massachusetts General Hospital and Yale University. As a result of his research efforts, Thomas has produced three peer-reviewed publications in major journals, including a ground-breaking paper on postpartum depression which appeared in the Journal of Affective Disorders. In addition, he pursued a brief career in the performing arts.


Since 2010, he has focused his efforts on mediumship and psychic advice, maintaining a full-time, private practice dedicated to helping people around the world connect with loved ones on the other side through his spiritual gift.

Thomas John regularly contributes to HollywoodLife.com and has been featured by top media outlets including The Wall Street Journal, Travel Channel, OK Magazine, New York Post, The Jenny McCarthy Show, HollywoodLife.com, The Hollywood Reporter, The Trisha Show, Yahoo Voices and VIBE.com. He is also a regular guest on 103.9 WFAS FM and 77 WABC AM.


Thomas lives in New York City with his dog Brady, named after the New England Patriots' quarterback. In his spare time, he enjoys travel, family gatherings, meditation, and garage sales.