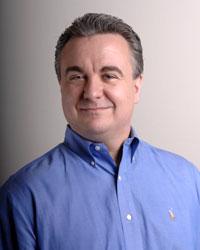 Tim Link is president and CEO of Wagging Tales and is a practicing animal communicator. As part of his passion for helping animals, Tim also has mastered Reiki, an ancient art of energy healing, which he uses on animals.

Tim grew up in Richmond, Ind. He married his high school sweetheart, Kim, and graduated from Ball State University with a Bachelor of Science degree in sales and marketing. After graduation, he built a successful twenty plus year career in sales management for the telecommunications industry, earning numerous awards and promotions for his achievements. He was living his dream as an all-American guy.

In February 2004, Tim learned with great surprise that he could communicate telepathically with animals. Until then, he had no idea he had this ability. Initially, Tim never intended to let many people know about his new found gift. He practiced with his own pets and those of his family and close friends as well as those boarded at the local rescue shelter. As he continued to practice on more and more animals, he noticed his gift was getting stronger. One day while volunteering at the shelter, a friend outed him and recommended that he help another friend who was having a situation with a pet.