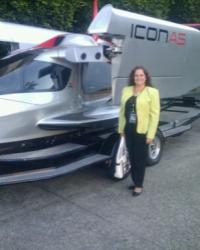 Tina Quizon is the President & CEO of the TQ Group Tina's Expertise is in showcasing People & Businesses with Multi Media Steering World Sectors. Tina's Award winning TV Show "Pathways to Paradise" has taken Tina globally throughout the world, using the power of media to film. In 2011 she was able to cover President Obama, US Secretary Hillary Rodham Clinton along with 21 other world leaders during APEC 2011 in Honolulu and in the Philippines. Tina has produced over 180 TV shows with the Hawaii Community and World Leaders, her film reach has taken her to cover a wide range of topics not only in the United States but to Asia, including STEM, Energy at MIT, Fashion week in New York City & the Philippines, and with President Aquino in Manila with his dedication to clean up the Environment and his work on Anti-Poverty in Manila and across his Nation.


Tina has covered events at the United Nations in NYC and in Honolulu with Ambassador Anwarul Karim Chowdhury and in Seoul Korea for the United Nations B4E 2010 Summit, she has interview William Holloman, one of the famous WWII Tuskegee Airman who was part of some of the most successful bomber escorts of World War II. Tina continues to expand her horizons and loves to share her insights. She is currently working on a book and her script for her movie 'The Essence of Gold.'

Tina Quizon has been quoted as saying "Our Bottom Line & ROI Return on investment is Human Potential".

You can view some of her "Pathways to Paradise" TV Shows Here: http://www.youtube.com/user/globaldelegates2011 .

sharing her insights, abilities & inspiration of bringing the stories of people and our world to TV, print and film .

Tina received the 2011 NYCIFF award for: "The Most Creative TV Pilot." and was awarded the

Editor in Chief www.tinaquizon.wordpress.com "News from around the World" .