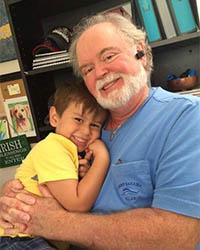 Tom Pauley is a salesman, who teamed up with his daughter Penelope and produced a best selling book; I'm Rich Beyond My Wildest Dreams I am I am I am How to Get Everything You Want in Life. Described by one reviewer as Napoleon Hill meets Deepak Chopra, it quickly became a top seller. This book tells the story of one family's rise from a second bankruptcy to a rich and happy life, practically overnight.

Tom graduated from the University of Nebraska with degrees in History, Sociology and English with a specialty in writing. He has had over 44 different occupations and professions. He has written and produced advertising for some of the largest corporations in the world. Yet only a few years ago Tom was faced with what at the time seemed like insurmountable obstacles. He had just gone through his SECOND bankruptcy in 10 years. He was forced to move into a rented home that he shared with hundreds of thousands of ants. His refrigerator had so much rust on it; magnets would barely stick to it. He found himself continually struggling to make even the most basic ends meet. He felt ashamed, defeated and had nearly lost all hope as well as his self confidence and self worth. Then something amazing happened. He discovered that there was a plan for him. A plan that would change the entire course of his life and make him "Rich Beyond His Wildest Dreams." At first he ignored this plan that had been revealed to him. He initially wrote it off as coincidence and didn't want anything to do with what he believed at the time to be "that weird foo foo stuff."

As fate would have it, eventually he was reintroduced to and did follow the plan that had been revealed to him months prior, and as a result, today he IS rich beyond his wildest dreams.

Penelope are revolutionizing business and personal communications as the creators of their powerful and effective connection process, Quantum Selling, which became one of the first big internet success stories by applying quantum theory to the business of selling. It is bringing in more millions than we care they care to talk about. In their first year their website became the 37th most profitable website in the world by income received. And They went on to build a second multi-million dollar business teaching others the principles they use in their own success.

Then on March 28, 2009 Tom suffered seven strokes and came as close to that final reckoning as anyone can get. In a Near Death Experience he faced the choice of moving on to what had the makings of one amazing celestial party or returning to this world. He chose to come back because he still had work to do. He has been blessed with the opportunity to fulfill his mission and to share with the world the vision he was given.