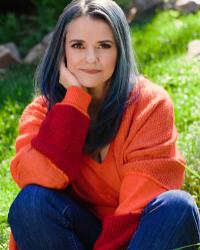 Tori Hartman is a world-renowned intuitive, best-selling author, and spiritual teacher. Born and raised in the free-thinking atmosphere of New York's Greenwich Village in the 1960s, Tori has been aware of her abilities since the age of eight. After a near-death experience about 25 years ago, Tori began having a series of encounters with angels that revealed the profound fables that were to become the basis for her international bestselling Chakra Wisdom Oracle Cards.

Tori’s Chakra Wisdom Oracle Cards have spent the last 5 years in the Top 10 card decks on Amazon, often in the number 1 position and have sold over 100,000 copies worldwide.

Enlightenment Made Simple is at the heart of the remarkable reputation Tori has built and the two companion books to her bestselling deck, The Chakra Wisdom Oracle Toolkit and How To Read the Cards for Yourself and Others both carried on her passion for guiding others to their purpose. She is firmly committed to making things less Woo and more you!

She has used the foundational teaching of Chakra Wisdom (learned from her Oracle deck) to create her groundbreaking new deck: Chakra Wisdom Tarot – where for the first time in any Tarot deck the Fools Journey is undertaken by a woman.

Before dedicating herself full time to her writing and teaching, Tori had a varied career that began as a petite model and led to her friend Jeff Lewis from Flipping Out putting her on the first season of his show, before other obligations called her away.