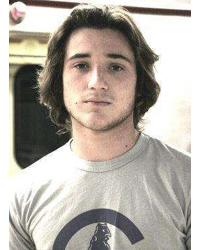 Born in Chicago, Illinois, on November 26, 1986, Trevor Morgan was discovered in a shopping mall at the age of six. He did commercials and even appeared on a Life Cereal box until his first movie, Family Plan 1997. Since then, Trevor has been making movies to the delight of the public. He appeared alongside Haley Joel Osment in The Sixth Sense 1999 and with Mel Gibson in The Patriot 2000. He lives in Orange County, California, with his parents, three older half-siblings Jen, Matt, and Joe, and a dog.

Morgan was discovered by George Papadakis, a commercial photographer, at 5 yrs. old. Papadakis set up an appointment with a talent agency & casting director saw him and asked his mother if she would be interested in taking him to an audition. He then appeared in several commercials for McDonald's and Cheerios and even was featured on a Life cereal box. He got his first break as Alec Mackenzie in the feature film The Family Plan, which led him to appear in Barney's Great Adventure. Morgan was given the lead role of Duke Cooper in I'll Remember April. His co-star Haley Joel Osment was given the lead role of Cole Sear in The Sixth Sense, where, in a dramatic reversal, Morgan played Cole's nemesis, a pretentious young actor.

After the success of The Sixth Sense, I'll Remember April was rushed to video due to Osment's role as Pee Wee Clayton. Morgan's picture was replaced by Osment's on the box for marketing purposes. Actor/director Mel Gibson, who was looking for several child actors to play his seven children in The Patriot, saw Morgan and asked him to audition for the movie. He landed the role, playing son Nathan Martin.

Morgan appeared in the films Jurassic Park III and The Glass House 2001. Among his other credits are Empire Falls as a menacing jock, the independent films Mean Creek, Off the Black and Local Color, and the baseball flick Chasing 3000. Morgan appeared on the television series, ER, where he played cancer victim Scotty Anspaugh for five episodes. For this role he garnered a 1998 SAG Award along with the main cast members of the show. His additional television credits include Genius for Disney Telefilms, In the Dog House for Viacom/Showtime, Touched by an Angel for CBS, Fire Co. 132 for 20th Century Fox and Missing Persons for ABC.