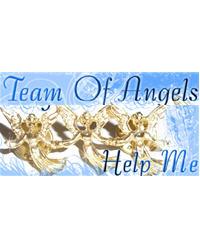 Trish Gallagher, a mother of four children, ages 23, 21, 18 and 16 was going through an especially tough time one night and she spoke to God in her usual familiar way, asking Him to send an angel to help her. No, better send a team of angels, Lord; I dont think one will do. The words started her thinking. How many people were overwhelmed like her, and might welcome an actual, tangible sign of support? Trish, a former businesswoman, began to research her idea, and soon created a gold lapel angel pin featuring three angels holding hands. She mounted the pin on a card which bore a Team of Angels poem which she wrote, and began to spread the word.

Trisha contacted some chaplains and sent 5000 of the pins overseas to be distributed to our U.S. troops in the Middle East. She donated 2500 more to hospitals and womens groups in her Pennsylvania community. I dropped them off at toll booths, mailboxes, waiting rooms and phone booths, Trisha says. I even put a basket of them on my front porch, and encouraged neighbors to take what they needed. Her instructions to every recipient were the same: Keep this pin until you meet someone who needs it more than you do, and then pass it along. Trish rarely sold the pins, asking only for postage on occasion and if a recipient couldnt afford postage, she got her pins anyway. How I managed to finance this is a story only providence and the angels could explain, she says. But unexpected donations and support always arrived just as she needed to produce more angels.