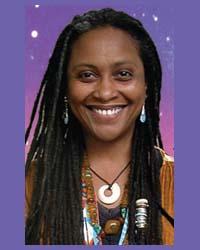 Ubaka Hill, visionary, motivational leader, has been a performer of percussion, poetry and song for over 30 years since the age of 17 and a teacher of hand drumming for over 25 years Ubaka is a nationally known and respected performing artist and teacher of hand drumming for all ages and especially for the liberation and reclaiming of the sustainable power of women and girls. She is a strong advocate of the power of re-mything and redefining ourselves for a new paradigm. Ubaka is the founder and Musical Director of the Drumsong Orchestra and The ShapeShifters Ensemble and Founder of the first Museum and Archives of Women's Drumming Traditions.


Ubaka has envisioned and initiated the first Million Women Drummers Gathering 2013, a global initiative currently being organized in many local communities. She was the visionary, co-founder/co-producer of "The Happen'n," the first all women's drum camp on the east coast. Her teaching skills, generosity of knowledge, information and encouragement has inspired the development of other women's drum camps in the US and Canada, drumming groups and women-owned business related to the needs of drummers.


She has recently invited to be on the Advisory Council of the Women's Leadership Center of the Omega Institute. Ubaka has received many special recognitions and City proclamations. You may have seen her performance or participated in her Drumsong workshop at many well known national women's music festivals, sacred music festivals, world music festivals, and conferences and in documentary films such as "Radical Harmonies." She is also singing and drumming in the DVD documentary of the 13 Indigenous Grandmothers, at their first gathering meeting in upstate New York.


Ubaka has 3 music CDs : 'ShapeShifters' 'Dance The Spiral Dance' and her latest CD called 'Beyond The Wind.' Each CD is a vibrant authentic tapestry of rhythmic music, poetry and songs. All of her recordings include many skilled, multi-cultural musicians of various instruments and women of her Drumsong workshops from across the United States, The Drumsong Orchestra. Ubaka's music is message music to massage the mind, body and spirit.