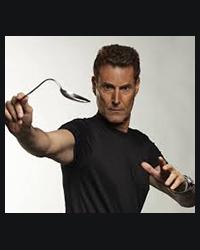 Uri Geller is one of the world's most investigated and cele- brated mystifiers. Famous around the globe for his mind- bending abilities, he has led a unique life shrouded in de- bate, controversy and mystery.

In 2012 Uri was awarded the prestigious Golden Grolla award, at the eleventh "Masters of Magic" convention in St Vincent, Italy, for inspiring the world of magic. In 2012 Uri also received the Star Foundation award at the house of commons Houses of Parliament in London, in recognition of his charity work.


In 2013, filmmaker Vikram Jayanti debuted a documentary at the Sheffield Film Festival UK, commissioned by the BBC and titled The Secret Life of Uri Geller: Psychic Spy? Jayanti directed the Oscar-winning Muhammad Ali documentary, When We Were Kings. Watkins Publishing followed-up the film with the release of a brand new biography of Geller un- der the same title and written by celebrated
Financial Times journalist, Jonathan Margolis. Watkins Publishing, October 2013.
WWW.WATKINSUSA.COM WWW.WATKINSPUBLISHING.CO.UK