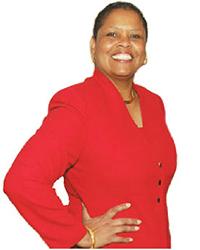 Valda Boyd Ford, MPH, MS, RN, a self-proclaimed "daughter of the South," is one of the most intellectually disarming and humorous presenters on leadership, privilege and cultural competency in the nation. Noted as being "captivating, humorous, and thought-provoking" by Jeff Joseph of Frito-Lay, Valda brings a homespun, down to earth informality to her presentations, and uses a combination of self-effacement and "Can we talk?" attitude that swings from virtual stand-up comedy to lump-in-the-throat poignancy.

From describing her first experience with a public toilet in a West African refugee camp to explaining how to defuse rage and resentment when the arrogance of professionals contributed to the death of her son, she mesmerizes her audiences 'with her commanding presence, her authoritative presentations, and her mix of styles humor, stories, solid use of data.' Valda is a living library of cultural competency case studies compiled of the sheer expansiveness of her international travels and cross-cultural experiences.

Valda is the President and CEO of the Center for Human Diversity, Inc, the host and executive producer of Valda's Place a long-standing cable television talk show, a member of the National Speakers Association, the Global Speakers Federation, and Toastmasters International. She has received numerous honors and awards for her work as Director of Refugee Initiatives for Unite for Sight and other nationally recognized civic organizations.

Valda's career includes nearly a decade of service in Saudi Arabia and the U.S. Virgin Islands. From Fortune 500 companies and small businesses to health organizations and law enforcement agencies, Valda has made presentations on leadership, public health, and cultural competency in 25 states of the U.S, as well as in over 40 countries abroad including China, Afghanistan, the Netherlands, Wales, Poland, Ghana, Saudi Arabia, the U.S. Virgin Islands, Denmark, Sierra Leone, Sri Lanka, and Australia.