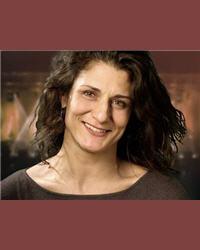 Vanda Mikoloski began her stand-up comedy career in 1982 at Catch a Rising Star in New York City, where she was a late-night emcee. She toured nightclubs and colleges in the U.S. and Canada for 15 years. Her television appearances include Showtime's "Comedy Club Network", "Comic Strip Live" and Lifetime Network's "Girl's Night Out." Vanda was voted the "Funniest person in Washington" in Showtimes "Funniest Person in America" contest in 1987.
As a yoga and meditation teacher, she toured with award-winning country/pop artists, The Dixie Chicks on their 2000 "Fly" tour for 6 1/2 months, as well as rock sensation Patty Griffin. She makes her home now in Venice, CA., nurturing her third career as a "Spiritual Quantum Comic" using all of the knowledge, wisdom and nonsense shes acquired from influences such as the movies, What The Bleep Do We Know and The Secret, Ramana Maharshi, Eckhart Tolle, David Deida, Landmark Education, 12-step work, A Course in Miracles, Byron Katie, Ram Das and various channeled entities to inspire people through laughter. Vanda says "Standing on those shoulders, I intend to expand consciousness by stirring up and promoting irreverent reverence, and to uplift, heal and connect people through laughter I would like to help people grow limbs back and such."
"The most amazing Masters I have ever met are amazing because of how accessible they are as human beings, because of how they listen to others and how responsible they are in regards to generating their realities and how insignificant they are about their inherent value. They know that they are The Great Nothing/Everything. And thats something."

Her work is a delightful, irreverent romp down her twisted spiritual path. Vanda's comedy deals with the human predicament, the trap of the egoic mind and the absurdity of it all. Vandas passion is personal growth and development. She offers powerful spiritual distinctions in a ridiculously funny way that leaves the audience inspired. She begins by questioning our point of view about our point of view and then challenges many of our spiritual beliefs and beliefs about reality, riffingpassionately about enlightenment, quantum physics, the nature of and pitfalls of being a human being, personal growth, spirituality, metaphysics, yoga, meditation, peace and love.