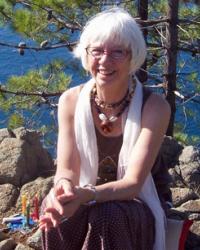 Vicki Noble is a feminist healer, teacher, and scholar, co-creator of the round Motherpeace cards and author of eight books, including Motherpeace 1983, Shakti Woman 1991, and The Double Goddess 2003; her books have been published in several languages. Vicki got her BA in Womens Studies and spent several years engaged in the Womens Health Movement in her twenties. After a spontaneous yogic and shamanic awakening in the late 1970s, she taught yoga and female shamanism, eventually founding and directing the Motherpeace School for Shamanic Healers in Oakland, California 1987-1991 and publishing SnakePower: A Journal of Ancient and Contemporary Female Shamanism 1989-1990.

Since the early 1990s, Vicki has traveled and taught internationally, taking women on pilgrimage trips to sacred Goddess sites and facilitating workshops on Motherpeace, female shamanism, and Tantric Buddhism. During the last decade, her focus has been on creating and transmitting original Dakini practices, adapted from Tibetan Buddhism, to her women students in the US, Europe, and South America, and on participation in the international Matriarchal Studies movement. She is an Associate Core Faculty professor in a Womens Spirituality Masters Program at ITP Institute for Transpersonal Psychology in Palo Alto, California, and a professional astrologer as well. She lives in Santa Cruz, California near her grown children and grandchildren, where she gardens and keeps bees.