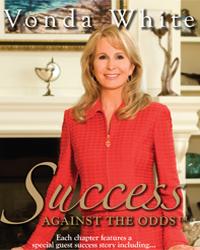 Life wasn't always this good for Vonda White. In fact she comes from very humble beginnings. Her parents divorced when she was only eight years old. Struggling financially to raise three children, her mother had to turn to welfare and food stamps. While other little girls were playing hop-scotch, Vonda was picking up empty soda cans redeeming them for the 5 deposit. And then there was the abuse.

Vonda grew up believing the condescending words spoken to her. She acquiesced to the darkness of her jaundiced world. At the urging of her church friends, Vonda attempted something no one in her circle ever imagined she would. The beleaguered teen entered the state beauty pageant. After two failed attempts Vonda won the state title and consequently learned first-hand the power of persistence, self-image and goal-setting.

The pageant awarded Vonda college tuition, and with that, she left Idaho and all of the negative baggage that went along with it. She never looked back as she built her new life upon the solid principles she believed in, the valuable lessons she learned. It wasn't long before she expanded her skill sets while serving in college leadership positions, including student government president in her senior year.

Fresh out of college, Vonda was a woman on a mission. She made a promise to herself to achieve her goals. And achieve them she did. Vonda set a sales record her first year in insurance sales. She made Vice President at 27 and started a new business while she was six months pregnant with her first child. Life has been a whirlwind for Vonda and she's just getting started

Recently, Ms. White wrote and published a book so that others who are struggling could chart a clear path to their desires. Vonda penned "Success Against The Odds" to give anyone who wants to improve and put balance in their life the inspiration and guidance for positive change. "I wanted to help others who feel they are just not good enough believe they are capable of doing anything. They need someone to tell them, You can do it and here is how you can do it White says.