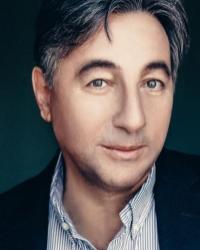 At the tender age of 3, C. William Camilleri’s small world became engaged with the wonderful sounds of music through his affinity with the piano, drums, violin and recorder. Born in London, England, of Italian origin, his abilities grew and by the age of 17, now living in Toronto, Canada, he was told by the Director of The Ontario College of Percussion, Paul Robson, that he could easily become one of the worlds greatest drummers. At Paul’s suggestion William took up private tuition with world famous American drummer Peter Magadini who was also in Toronto at the time. William’s musical journey began to take a quick and noted path that led him back to London where he played with many world famous artists, including Tina Turner on her hit single “Let’s Stay Together.”

His first recorded CD was developed after being discovered by Prof Pirkilbauer faculty at the Mozarteum in Salzburg, Austria where he was commissioned to compose his first CD. A year later William was discovered by Prof. Steven Paul, Head of A&R at Sony Classical in New York, who described William’s compositions as monumental. Prof. Paul then put William in touch with Bob Hurwitz, Head of Time Warner in New York, who graded his music as something astonishing calling William “a musical phenomenon.” As a result of his continued musical ascent William was later signed on by Claire Best at Sandra Marsh Management in Beverly Hills, a leading Hollywood Film company, who rated William alongside John Williams, Hans Zimmer, Danny Elfman and Alan Silvestri. They opened a music department specifically so they could represent him on the strength of a CD composed, arranged and recorded within a single week.
Noting a constant and evolving methodology to his music, William found he didn't fit in with traditional music groups and thus set up his own studio, Studios, where he composed his own special brand of music. This state of the art recording studio is where William composes all styles of extremely high quality music ranging from simple samples to full blown symphonies. Gifted with the ease to compose without changes, William’s style of Direct Composition allows him to rely on sheer inspiration, even while performing live, and he is able to deliver some of the most powerful melodic music that can be heard today. He has composed over 400 CDs, and has worked with many leading orchestras including a commission to compose a large orchestral work with the Warsaw Philharmonic in Poland, which attracted the attention of the heads of several record companies such as Warner Music, Sony Classical, and Naxos of America. An astonishing feat for this self-taught musician, William has also worked with DreamWorks, Lionsgate Films, Universal and many more on film productions.
His unique and timeless style had also garnered the attention of Prof. Erik Gregory, Consultant to the Harvard and New England Conservatory, who requested that he lecture on film music to aspiring Composers and Film Makers. The Mercedes Benz Fashion Show also came calling when he was contacted by Maria McDonald, head of New York Fashion Week, and was commissioned to submit 8 music videos for the red carpet event in Manhattan, New York. In addition, he was asked to perform live in concert at the prestigious Lincoln Center after which he was approached by two major record labels, in the US and Europe, through whom he released 5 CD’s. William’s music has often been described as “emotional,” “evocative,” “healing,” and has been known to create such profound effects that people have burst out into tears!
In February 2011 William was asked to perform at Haute Couture Fashion week in Concert in New York City at the Waldorf Astoria where he performed on the Red Carpet for a worldwide audience broadcast in 18 different countries. Additionally, he was asked by Linzy Attenborough to be Head of Music for First Impression Films Ltd, a new large Film/Multimedia Company in London and also, the Head of Music at Thought Juice Films, another Film Company that specializes in High Level Music Videos and all aspects of the Film, Music & Recording Industry.
Perhaps the most important of all of William’s work is his incredible true life story which is currently in development to be released as a feature film entitled, “The Composer,”slated to hit theaters in 2016. Serving as Executive Producer and Composer of the film score, The New York Film festival, upon hearing a brief synopsis of the film, stated that “the story has amazing potential to become an Oscar-winning movie.” The Composer will be a cross between Good Will Hunting, Cinderella Man, A Beautiful Mind and Forrest Gump. Part drama, romance, and thriller The Composer is already attracting the attention of the film industry worldwide as it has attached industry heavyweights like Academy Award nominated Cinematographer Garry Waller (E.T the extraterrestrial, Star Wars, Poltergeist), Music Legend Alan Parsons (the Beatles' -Abbey Road, Pink Floyd - Dark Side Of The Moon), Academy Award winner and Visual Effects Master Richard Edlund A.S.C (Star Wars, Air Force One, Die Hard, Ghostbusters, Cliffhanger, The Hunt for Red October), Sound mixer Paul Marshal CFA (Oba: The Last Samurai, American History X), Producer Nancy Valle (Last Knights, Barely Lethal, The Twilight Zone), Director and Cinematographer Sean Mullens (Emmy Nominated, Cannes Lions & Clio award winner ) and numerous talented actors including Natalie Burn (The Expendables) and others all with an unfinished screenplay! For more about The Composer film please visit http://thecomposer.global/.
Every project William has been involved with has been a tremendous success and various websites publish glowing reviews of William’s music which is changing the course of music as we know it. Having established the New Romantic Neo Classical genre of composition, William continues to exceed expectations. In 2015 he also founded and serves as CEO of The Composer Global LTD, a new film production company that will specialize in development and production of high quality films for a global audience.