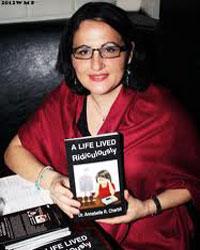 Dr. Annabelle R. Charbit grew up in London, UK, and has been writing since 2006, when her comedy play, Sound Advice, was performed by CP Theatre Productions in London, UK. In 2007, she was published in the London Paper and in the British Neuroscience Association's Summer Bulletin. In 2010 she wrote for TheFrisky.com, an online magazine who commissioned her after noticing her blog, Crazy in a Crazy World.

Dr Charbit holds a PhD in Neuroscience from University College London and has been researching migraine headache at UCSF in San Francisco, about which she has published in scientific journals. A Life Lived Ridiculously is Dr. Charbit's first novel.