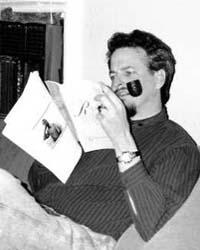 Joseph P. Farrell has a doctorate in patristics from the University of Oxford, and pursues research in physics, alternative history and science, and "strange stuff". His book The Giza DeathStar was published in the spring of 2002, and was his first venture into "alternative history and science". The sequel, The Giza Death Star Deployed came out in Spring 2003, and the final book of the Giza Death Star trilogy, The Giza Death Star Destroyed, in 2005. Additionally, he has published two books on Nazi secret weapons, Reich of the Black Sun and The SS Brotherhood of the Bell. His new book, The Cosmic War: Interplanateray Warfare, Modern Physics, and Ancient Texts, came out in the autumn of 2007, and the sequel to The SS Brotherhood of the Bell, Secrets of the Unified Field: The Philadelphia Experiment, the Nazi Bell, and the Discarded Theory, came out in March of 2008.