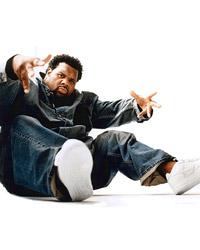 Fatman Scoop born Isaac Freeman III is a New York City hip hop hype man and radio personality famed for his on-stage rough, loud voice. He is best known for the track "Be Faithful" with The Crooklyn Clan, which went to number one in the UK and Ireland in late 2003 and top 5 in Australia. The follow up "It Takes Scoop" reached the top 10 in the UK, the top 20 in Ireland and the top 40 in Australia in 2004. In 2005, Fatman Scoop was featured on two hit songs, Mariah Carey's "It's Like That" and Missy Elliott's "Lose Control". He is currently staring alongside his wife Shandra on the MTV show Man and Wife.