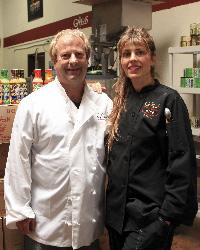 Old World meets New World in an astonishingly delicious way. Born in Russia and Yugoslavia, respectively, where preparing meals is a labor of love shared by the whole family, Andrei Leontieff and Gordana Samardzic came to America and combined their exceptional culinary talents to create Galeos Miso Dressings, the most extraordinary all-purpose dressings/marinades in the whole wide world.

The youngest of three brothers, Andrei Leontieff began his culinary career with a bang At age seven, when his grandmother allowed him to bake the sausages, the kitchen stove suddenly exploded, leaving fifty to sixty sausages stuck to what was left of the ceiling and walls. Though his grandmother continued to nurture his passion for cooking, this may have been a pivotal moment for Andrei, because he eventually moved to London, where he earned a degree in structural engineering. However, some things are simply meant to be. Andrei's first commission upon graduating was to design and build a restaurant in the Knightsbridge area of London. When the owners defaulted before completion of the work, Andrei Leontieff happily embraced the opportunity to open his first restaurant, which remained a popular, highly rated haunt for Londoners and Embassy personnel for the next eleven years. A world traveler, fluent in five languages, Chef Andrei constantly delighted his discerning customers with an unexpected array of international favorites. In 1992, Andrei came to America and opened a nightclub in Newport Beach, California, but soon missed the excitement and creativity of his first love, cooking.

Gordana Samardzic grew up in Yugoslavia, where mealtime always feels like a party, with the whole family pitching in, each dish a celebration of the senses. Using fresh produce from the family's organic garden, Gordana's mother encouraged her to be creative, to add her own personal touch, with an eye to color, texture, and aroma, as well as flavorto never rely solely on the tried and true. Well traveled and fluent in six languages, Gordana started out in food service, gaining experience in international cuisine, but her life soon took a detour as well when she became a successful model in print and television commercials, and for the House of Versace in Italy. However, after moving to America in 1995, a chance meeting with Chef Andrei brought her full-circle, and the two have been cooking up international favorites and exquisitely innovative new recipes ever since.