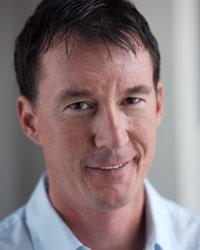 For author and entrepreneur Jim White, the path to his purpose in life has been filled with more accomplishments and life-changing circumstances than most people realize in more than one lifetime. Yet it was a simple human moment in London that propelled him to stop, examine and reconstruct his entire lifes calling. Whites ensuing development of THE WORLD IS A SAFE PLACE philosophy shared in his series of books is deeply impacting thousands of people around the world.

Originally from a small town in Iowa, White is a forward-thinking global citizen and businessman who has lived and worked in 22 countries during his career in the entertainment industry. After working as a senior executive for high-profile companies like Blockbuster Video, Universal Music Group and currently as a VP at Paramount Studios, White has developed a keen eye for spotting everyday miracles and has trained himself to see the world in a very unique waythe same way he hopes millions of others will also.

Through sharing his personal stories and observations of the world around him, White gently draws people into deeper modes of exploration and self-discovery. Whites imminent release of the second book in THE WORLD IS A SAFE PLACE trilogy is entitled THE MIDDLE OF FOREVER, and will soon be followed by the third in the series, ITS TIME TO MAKE A WISH. As a pioneering resident on the forefront of the Downtown LA loft-development movement, Jim co-founded a distinctive real estate, travel and lifestyle company called, ULTIMATE LIFE LIVING www.ultimatelifeliving.com, which plays a key role in the residential expansion of LAs burgeoning city center.

Through his enterprises, Jim continues his long-standing commitment to the community, directing funding support towards Beyond Shelter www.beyondshelter.org, a Los Angeles-based nonprofit organization dedicated to the development of systemic methods to eradicate poverty and family homelessness. White serves on the Executive Board of Directors for this esteemed organization.

White has lived in a historic bank building loft space in the heart of downtown Los Angeles for the past eight years. He is truly a pioneer in todays society and a living demonstration that THE WORLD IS A SAFE PLACE.