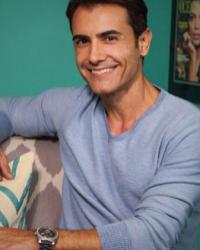 Martin Amado is a TV personality, interior decorator, lifestyle expert, and author of One-Day Room Makeovers. He is currently a TV host/design expert on ION Television, a leading U.S. general entertainment network, a home contributor on Acceso Total on WSCV Telemundo 51 and NBC’s 6 In The Mix airing in South Florida, and nationally on Telemundo’s En Casa Con Telemundo. Upcoming projects include a DIY series for CreateTV.Com. Prior to that, local viewers became familiar with his work on the home makeover segment Room for Improvement that aired on WSVN 7 News, FOX affiliate, for over 11 years; and most recently on SoFlo Home Project on WPLG Local 10, ABC affiliate, which he hosted for almost four years. In addition to his experience in the general market as a host/designer for HGTV (Home & Garden Network) on shows such as Small Space, Big Style and Decorating Cents, Martin has worked on numerous Spanish-language media platforms airing nationally in the United States and throughout Latin America including Telemundo’s morning program, Un Nuevo Día. He was also the lead designer on Decorando Contigo that aired for five seasons on Galavisión. His decorating segments have been featured on Univision’s Despierta América, TeleFutura’s Escándalo TV, and on Utilísima/FOXLife program’s Tu Vida Más Simple and Hogar Express. His TV journey also includes being an on-air guest expert for the HGTV Home brand on HSN (Home Shopping Network), as well as being one of the original hosts on HSE (Home Shopping En Español).