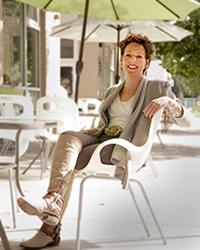 Patricia Michael Melnice is the founder of Tough Angels. This non-profit engages and empowers community mobilization to protect women and children from rape. By providing curriculum and training to community members and leaders, greater understanding about HIV/AIDS and its prevention is built on a local level. They create supportive and respectful forums, which facilitate discussions to educate men and women on the dire need to choose consensual sex. Tough Angels support survivors in safety, restoring dignity, hope, and healing.

Prior to Tough Angels and for more than 30 years, Patricia has been actively involved with organizations focused on issues concerning the well-being, protection and empowerment of women and children. While Patricia is a graduate from the Art Institute with a degree in fashion, her professional background has largely been in Emergency Services, which began at age 16, dispatching for the local police and State Patrol. This launched countless pathways in which to function in emergency situations including: working for a major metropolitan fire department, being appointed to the Command Post for disaster relief and the relocation of Hurricane Katrina victims in Colorado, and completing a six month tour of duty on the Antarctica Fire Department in the Communication's Center which supports the National Science Foundation.

Patricia played an integral role in the development of the Fire Academy at Red Rocks Community College and subsequently became an instructor in the Fire Science program. Melnice was a trained volunteer with CASA Court Appointed Special Advocate where she advocated for children in court. In addition, she has earned the title of "Cuddler," a volunteer position in the Neonatal Intensive Care Unit at Presbyterian/St. Lukes Hospital.