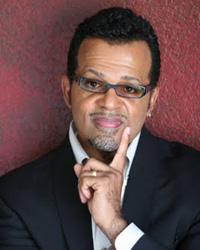 Recognized as a voice of reason and moderation in a world of extremes, Carlton Pearson has made a choice. A choice to move away from the exclusiveness of the religious traditions he was raised in and adopt a more embracing, affirming, welcoming and inclusive approach to faith. He has now fully embraced New Thought and Science of Mind as his newest focus and is enjoying studying with the likes of Dr. Michael Beckwith, Mark Victor Hansen, Deepak Chopra and other Luminaries in the Science of mind tradition and those who embrace Christ Consciousness as a way of life..

He has chosen to tell the world that the love the Ultimate Reality we like to call God, is absolute, complete and all inclusive. His message boldly declares that God wants us all to be in health and prosper as our souls prosper and that we become what we think about.

Prior to his entrance into Higher Consciousness, Dr. Pearson served for 15 years on the Oral Roberts University Board of Regents, of which he is also an alumnus, where he majored in Biblical Literature/English Bible and minored in Theology/Historical Studies. In 1978, Bishop Pearson founded Higher Dimensions Ministries Now New Dimensions, which grew from a traveling evangelistic team in 1977, to a multi-faceted ministry, which included a local church in Tulsa, prison and nursing home outreaches, a national Purity With Purpose Discipleship Program for men and women, with graduates nationally and internationally. Of late Pearson's ministry targets specifically and primarily the 'un or less-churched. His ministry now addresses issues of social, moral, cultural, religious and political concerns in a practical, yet provocative manner-relating faith to culture. He likes to call himself a sacred activist..

Bishop Pearson places high priority on personal integrity, meaning the integration of the Self and Soul all within the global human family and spirit. He believes the opposite of that is disintegration of the human race and of civil society.

More recently, he has been given a mandate to proclaim the 'Gospel of Inclusion.' and has written a widely acclaimed book by the name, published by Simon and Schuster. The book confronts the Christian church's exclusivism as being inconsistent with the teachings of Jesus and that it is more important what Jesus said about God than what the church says about Jesus.

Believing that 'a silent church is a saltless church,' Bishop Pearson's frank and often controversial take on a number of different subjects has earned him appearances on television programs such as 'CBS Evening News with Dan Rather,' 'BET Tonight with Tavis Smiley,' ' 'The Edge with Paula Zahn' and 'Politically Incorrect with Bill Maher.' NBC Dateline, ABC's Nightline, 20/20 , National Public Radio and a number of other television, radio and Print media outlets. Bishop Pearson was recognized as one of ' America 's 10 Most Influential Black Ministers' by Gospel Today and Belief Net. He has received several honorary doctoral degrees and served on the boards of many benevolent and Humanitarian organizations. He was recently inducted into the MLK Board of Preachers at Morehouse College in Atlanta Georgia. He is a Stellar award winning recording artist and has also receive a Trumpet Award for Spiritual Enlightenment.

In 1993, Carlton married the former Gina Marie Gauthier pronounced Go-chay. She is a professional Life Coach and is founder and president of PHIT for life and does personal training in transformational concepts. They are the proud parents of one son, Julian D'Metrius, and a daughter, Majest Amour.